Chappelle went on Letterman last night and gave the public the much-needed information about his “departure” from the infamous Chappelle Show and the Hollywood life in general.

Basically, he said that he had signed a huge contract with Comedy Central and had some sort of self-realization moment where he decided there’s more to life than money and left to spend more time with his family. A bold and honorable decision, but it’s also pretty clear it all hasn’t been peaches and roses since the departure.

He also talks about his concert at Radio City Music Hall at the end of June. He’s performing with Nas and a huge orchestra. Probably the coolest thing ever. The fact that Chappelle recognizes the importance of Illmatic just reminds me of how fucking cool he is. 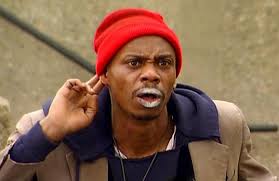 He also talks about opening up for Aretha Franklin at Radio City when he was 19. So maybe that’s the coolest concert ever. Idk. Either way, let’s hope he’s still got it.