This blog is going to be a little different than the ones I wrote for the Derby and the Preakness, hopefully this one touches your culture a little closer. I’m going to center this one around Triple Crown bids in recent memory that came up short. The last horse to win the Triple Crown was Affirmed in 1978, and we have a pretty good chance at ending the drought on June 7th. Just as it has been the previous two races, the Belmont is California Chrome’s race to win. That being said, his odds will be extremely low, making it tough to find value through bets in this race (it’s especially hard to tell right now because the entries aren’t announced until the Wednesday before the race). So if you’re trying to make a little coin, you’re going to have to find that value in the races before the big one and maybe work it into a pick 4 or pick 5. I’ll be at Belmont Park all day June 7th so when I have some picks I like, I’ll live tweet them that day for you; throw me a follow (@withaybry) and pray for some Le Pley.

Without further ado, here’s a culture lesson for you. Recent Triple Crown near misses:

Big Brown was the heavy favorite in the Kentucky Derby and an extremely heavy favorite in the Preakness, both of which he won by 5ish lengths. He had a lingering hoof injury in the weeks leading up to the Belmont, but were supposedly good to go for the big race. Big Brown ran into traffic at multiple points in the Belmont and jockey Kent Desormeux pulled Big Brown up, realizing something wasn’t right that day. “I had no horse” -Desormeux. 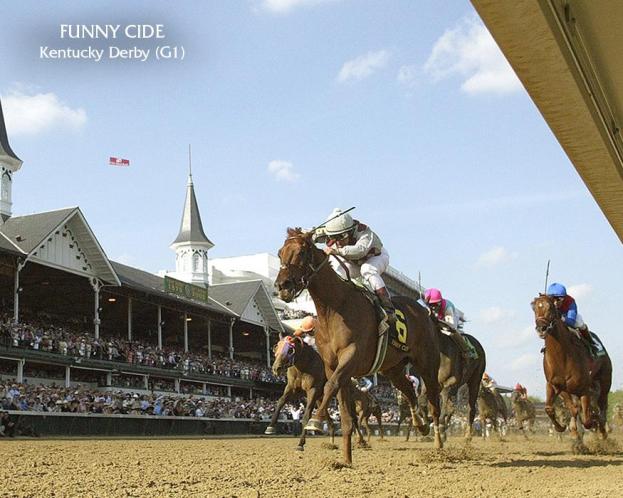 Funny Cide won as a longshot in the Derby and won in dominating fashion in the Preakness, but could not traverse the mud well enough to beat Empire Maker in the Belmont.

Charismatic was another heavy favorite in all three Triple Crown starts and was in the spotlight due to his raw talent and difficulties of his connections off the track (there’s a very good ESPN 30 for 30 on him, I highly recommend it). Coming down the stretch in the Belmont, Charismatic fractured his front left leg in two places, but still managed to hang on for third. 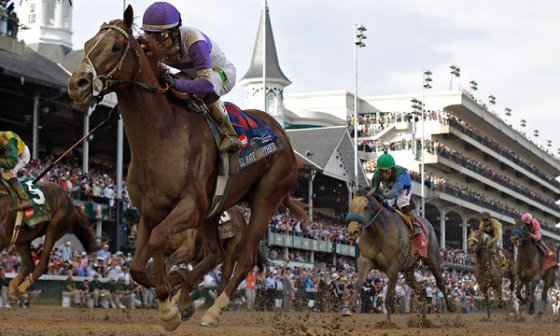 Two years ago, I’ll Have Another won the Kentucky Derby as a longshot and had his way with the Preakness field as the favorite, only to sustain an injury while training for the Belmont, yet again denying the world of its 12th Triple Crown winner in history. 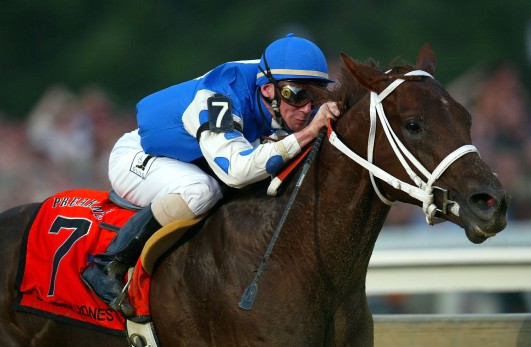 Smarty Jones is my personal favorite on this list and one of my favorite horses of all time. Maybe my favoritism is a result of my 11 year old self getting unnecessarily attached to a famous horse or maybe it’s due to the fact that after he retired, he bred with Mandy’s Gold, the multiple stakes winner owned and trained by two of my uncles. Yes, Smarty Jones is a Gorhammer in-law. But the favoritism really doesn’t come from either of those two things as much as it comes from the horse himself and the story behind him. Smarty Jones was a small horse with a huge heart. He was one of 4 horses in his owner’s stable, trained by the relatively small-time trainer John Servis, and ridden by Stewart Elliot (another friend of the Gorhammer clan). When he started training as a young two year old, he suffered a really bad head injury while schooling in the gate. He fractured his skull and spent 3 months in an equine hospital, and very nearly lost sight in one eye. Eventually, Smarty recovered, trained and made his racing debut in his home state in Pennsylvania, winning convincingly. He was immediately thrown into stakes races, then eventually Derby Prep races. He continued to win these races with ease. He won the Kentucky Derby as the first undefeated horse to take the Derby since Seattle Slew in 1977 and went on to win the Preakness by a record 12 lengths. But the Triple Crown proved elusive as ever on that Saturday in June for America’s horse Smarty Jones. The other eight horses in the race knew the horse to their outside in the 9 position, Smarty Jones, was head and shoulders above the rest of them. In the Derby and the Preakness, Smarty was able to stalk the leader and circle past him on the second turn, never to be caught again. The Belmont was different. Starting from the far outside forced Stewart Elliot to ride Smarty to the lead to get to the rail for the first turn. He was then pressured by the other horses who almost seemed to take turns putting pressure on Smarty Jones; as one horse behind/beside Smarty would get tired, another would come up and take his place. Birdstone was the eventual longshot who would take advantage of the grueling onslaught Smarty Jones was forced to defend against as it proved impossible to keep up for the full 1 1/2 miles. Take a gander for yourselves:

In my mind, it’s not the possibility of injury that threatens California Chrome’s bid at immortality on June 7th. Nor is it the weather or the rested opponents. It’s the development of the race and the unforeseeable challenges California Chrome will have to traverse over his mile and a half trip. Everyone knows there is enough horse under Victor Espinoza to end the Triple Crown drought, but will the race develop in way that will allow him to do so? Or will he find himself in an adversity ridden trip that is just too much to overcome? The only thing that is certain is that there will be a record crowd of burgahs at Belmont Park and I will be live tweeting some picks and maybe even some pics ;).

As far as betting goes, it’s really too early to tell what I’ll be doing, but I know a lot of you mushes will be mad if I don’t give you anything to work with. I’ll definitely play a pick 4 or 5 with California Chrome singled, trying to find some value in the other races. Maybe I’ll play a trifecta with California Chrome on top and look for some longshots to find the board behind him. One approach that I might end up doing is playing ALL over California Chrome to come in second in an exacta or third in a trifecta. The only problem is that I genuinely want CC to win, but this way if he loses, we still win (probably a lot). Big dog’s gotta eat, right?