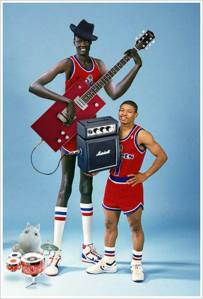 For the first time in my life, I’ve felt intrigued by the NBA. As a college football aficionado and Cleveland Browns fan, football has been my main priority in regards to sports.

I’ve found myself Wikipedia’ing players, watching every game on TV, and getting zooted while I do both. Balancing finals with melting into the couch and watching sports can be daunting, but let’s be honest here, the ladder is of greater priority to this graduating senior.

Not knowing much about basketball, I’ve consulted many more knowledgeable fans to assist in this week’s average player. We saw John David Booty last week and Hasheem Thabeet in weeks past.

This week, I give you one of the tallest to ever play in the NBA and the only player to ever have killed a lion with his bare hands. This week, I bring you the Sudanese Swatter, Manute Bol.

Playing 10 seasons in the NBA, Bol was known as a shot blocker, practical jokester and a fan favorite spotting up from long range in games where his squad was firmly in the league.

Although his lack of statistical success ranks him as average, Manute Bol’s legacy will forever been known among NBA enthusiasts. A big-man, philanthropist, and originator of the term “My Bad”, Manute Bol will forever be encompassed in history books of average athletes.