During the last series between the Sox and Yanks, Jerry Remy presented his top 3 favorite Yankees since 1980. I do not believe he made the most of this opportunity, so I am going to share my top 10 Yankees all time. No matter what, I still hate these guys because they are indeed New York Yankees. But some of these guys are classy baseball players that deserve respect. I am going to Fenway for the first time this season, and it is the first time the Yankees have come to Fenway this year. I am very excited to get my culture touched at Fenway, and was ecstatic about writing this post. This is not about the most talented Yankees, it is about which Yankees players deserve my respect.

Bernie is one of the most consistent baseball players of all time. You gotta love that he stayed with the Yanks for 15 years and I never heard him bitching about money. Since he retired, Bernie has been rocking out on the guitar. For a Yankee, he is cultured.

Don had an incredible mustache and was born on the same day as me, nuff said.

Tino worked at a cigar shop with Luis Gonzalez as children, and they both ended up being very average baseball players. Tino had a sweet name, so he was a little cultured.

Paul was a very intense player. Not to be confused with the former United States Secretary of the Treasury or the composer. This guy enjoyed the 1990s more than most people, winning 5 world series and an AL batting title.

“I am the luckiest man on the face of the earth”

Mickey mush made it cool to be an alcoholic baseball player. This guy defined slug fest, slugging beers and home runs.

The legendary 61 home run season has left quite an impression on me. I loved the movie, so that’s why I like him. 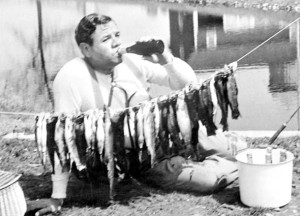 Ya, ya, ya… everybody knows the curse of the Bambino, but fuck this guy was cool. Hot dogs, beers, home runs, and cigars, what’s not to love?

DiMaggio mush hash tag got pleys. The guy played his heart out on the field, and got one of the best burgahs of all time in Marilyn Monroe. He was born Giuseppe and that’s my grandfather’s name. His brother’s Dom and Vince both played for Boston at some point in the career, making the DiMaggios culture.

I know a lot of Sox fans think Jeter is soft and all that other bologna. but truth be told, this guys represents the MLB very well. Plays hard and has stayed with the same team. His dating records alone give you know choice but to like him. People who hate Jeter, really just envy him.