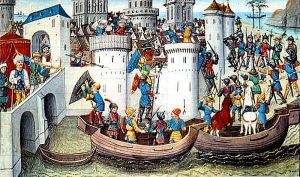 Earlier today Tackstyles talked to y’all about things girls do that are turnoffs to guys.  I’ve never talked to a girl, but here’s some cool history:

Today, April 11, has seen some monumental moments throughout the years.  But I’d prefer to talk about April 13.  On April 13, 1204 AD, Crusaders captured the city of Constantinople, temporarily terminating the reign of the Byzantines and leading to the establishment of the short-lived Latin Empire (1204-1261).  You see, before the world had the benefit of the Newton Public Schools’ “understanding our differences” program, people used to settle cultural, religious and political disagreements by hacking each other to bits.  Hence, the Crusades.

There were four major crusades from the late 11th to the early 13th centuries, each undertaken by European Christians at the behest of the Pope and aimed at dislodging the Muslim kingdoms from the Holy Land.  Islam was still the young start-up religion in these years, and the Christians in Europe were none to happy to see the Muslims controlling Jerusalem and other territories in the Middle-East which they felt belonged to the Jesus and his crew.  Personally, I think if the Christians could have seen some of the magnificent renovations the Muslims had made in places like the Dome of the Rock (http://www.vam.ac.uk/users/sites/default/files/2006ae3790_dome_of_the_rock_william_harvey_drawing.jpg) then they could have worked out some sort of time-share arrangement with the Mohammedans, but when has anyone ever listened to me?

Back to April 13.  What had happened was that after three essentially failed crusades, the Christians were still very intent on establishing a kingdom in the Levant (modern-day Israel/Palestine, Jordan, Syria, Lebanon) to protect their sacred sites against future Muslim aggression.  Also, the Christians had grown quite fond of butchering Muslims over the past 100 years, and to be honest the Muslims weren’t to bad at killing Christians either, so it just kind of worked itself out as history so often does.  In the Fourth Crusade the Crusader armies of Venice, the Holy Roman Empire and the French principalities (The French!  I know, right?) realized that they couldn’t gain any significant ground in the Levant unless they first took out the Byzantine behemoth to the north (present-day Turkey and the Balkans).  Thus, in 1203 the armies set out not to attack Jerusalem through Egypt as had been the strategy previously, but through the Byzantine capital of Constantinople.  After having besieged the city for nine months, the Crusader army of 20,000 men, led by Boniface I Marquess of Montferrat (a total mush) sacked Constantinople and slaughtered most of its 15,000 defenders.  This Sunday we solemnly celebrate this great victory for Christianity by going to church hungover, or in the case of agnostics like myself, doing Arabic homework (hungover).

The fourth crusade really failed in its goal of killing a lot of Muslims, because only about one tenth of the Crusaders made it to the Holy Land in the end (there were already some Christians there from previous crusades doing a haphazard job of fighting the Ayubbid dynasty) and the Byzantines were actually Eastern Orthodox Christians, who aren’t nearly as fun to kill as Muslims according to Medieval sources.  In fact, the 1204 sack of Constantinople understandably caused a major schism between the Catholic and Eastern Orthodox churches, an issue that would plague Christianity for centuries.

Fore a good, concise history of the subject read The Crusades:  A History by Jonathan Riley Smith or just play Medieval II Total War on your PC, cuz honestly you’ll probably do a better job of securing the Holy Land than the real Crusaders (I mean who the hell tries to besiege Damascus without first checking that there’s water near their camp?  Really,Baldwin III, amateur move bro)