This may be a bit different (and longer) than the other stuff you’ve read on TMC today, but if you’ve got a few minutes and are interested in the scholarly study of dead white guys killing each other (also called military history) then let’s talk a bit about German Field Marshall Erwin Rommel. If you know anything about the Second World War, you’ve certainly heard of Erwin Rommel and if you’ve heard of Erwin Rommel, you probably know that no Axis soldier was as respected by both his adversaries and contemporary historians as “The Desert Fox.” 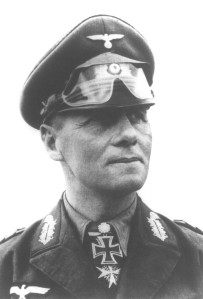 The charismatic leader of Germany’s Afrika Korps from 1941-43, Rommel led his outnumbered, under-supplied troops to numerous victories against the British in North Africa during the Second World War. Although his units were eventually forced out of the continent by a two-fronted Anglo-American assault starting in October/November, 1942 (The Battle of El-Alamein and Operation Torch, respectively) Rommel had solidified his reputation as a brilliant general in the 20 months prior as he led his armies in rapid advances from their bases in Western Libya into Egypt. Rommel’s use of quick, multi-pronged panzer maneuvers (a panzer is what cultured people and/or Germans call a tank) gained him impressive victories against numerically-superior British forces at Benghazi, Halfaya Pass and Gazala among others. Many historians believe that had Hitler invested more in the Afrika Korps and given Rommel the fuel his Panzers needed (those Nazis didn’t care much about their carbon footprint) the Germans could have pushed the British out of Egypt, crossed the Suez Canal, and secured the oil fields of the Middle East, inevitably altering the course of the war.

Rommel’s reputation is still today that of a chivalrous officer, a cultured man and a reluctant Nazi. He coined the term Kriege Ohne Hasse (War Without Hate) to describe the fighting in North Africa and his treatment of Allied POWs (Prisoners of War) gained him praise from top Allied commanders. He tore up Hitler’s orders to execute captured Allied Commandos, Jewish soldiers, and North African civilians even though he could have been relieved of command for doing so. In one instance he even ripped off the dog tags of a Jewish-American POW before handing him over to the military police, most likely saving the guy’s life (this was before the US War Department realized that printing JEW on the dog tags of a GI and then sending him to fight the Nazis was a bit shortsighted). When the Australian garrison at Tobruk surrendered after a 240-day siege Rommel addressed the Aussies in perfect English, praising them and saying, “Gentlemen, you have fought like lions and been led by donkeys.” The act which truly solidified his reputation with the Allies was his decision to participate in the July 20, 1944 (failed) plot to kill Hitler. For his role in the plot Rommel was forced to commit suicide in order to save his family from prosecution, and his grave in Germany is still visited today by Germans, Brits and Americans alike.

I recently asked Pulitzer-prize winning historian Rick Atkinson what he thought of Rommel and he said: “he was a good self-promoter, but he was still a Nazi, and we shouldn’t forget that.” It’s very true that for all of the praise he has received, Rommel was far from a reluctant soldier of Hitler’s Reich. His house in Württemberg had been confiscated from a Jewish family that eventually perished in Bergen-Belsen concentration camp. His letters to his wife Lucia show that even late in his life he was still captivated by Hitler’s personality. Although he never joined the Nazi party (which he felt was too “brash”) he did comment in 1934 that Hitler showed promise in dealing with Germany’s “Jewish problem.” His decision to help assassinate Hitler was motivated more by a fear that Der Führer was leading Germany towards a destructive defeat than by humanitarian reasons. And while Rommel never participated in the holocaust or other war crimes, given his position in the Wermacht he would have likely seen evidence of Nazi extermination policies, and yet he was never known to have protested.

Rommel remains a captivating character. In the seventh grade, in lieu of having friends I dedicated my time to writing a 27-page paper on the Desert Fox for Mr. O’s World History class. I am slightly less socially-awkward today, but I am still obsessed with this guy’s story. I’ve always wanted to see Rommel as the perfect military adversary, an otherwise morally-upright individual who just happened to be on the wrong side of history, but the more I look into it the more I realize he weren’t no Mother Teresa. On the one hand, he found the courage and moral clarity to disobey orders and treat enemy soldiers with a sense of respect and humanity that seems unfathomable in the hellish carnage of WWII. On the other hand, he was an active and energetic defender of Nazi Germany, and regardless of his political differences with Nazism he never chose to question his country’s racial policies. So while he was not directly responsible for the unprecedented horrors of the Shoah he never protested and indeed may have supported much of the visible persecution of the Jews that paved the way for Auschwitz, Treblinka, Belzec et al. I’m still not sure how I feel about Rommel, but it’s important that we look at controversial historical figures like him so we understand the ambiguous nature of human affairs. Being cultured, after all, means thinking about the hard questions