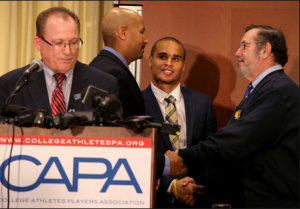 Clearly there is something wrong with the NCAA. Athletes perform an act for the school, and the school makes all the profit. Yes, I understand most of these players receive scholarships, and opportunities they would not have had, but it does not equate to the millions schools make.

Colter said, “”Obviously this is a huge day not just for Northwestern football players but all college athletes. It’s about gaining basic protections and rights.”

Now, this does not have any immediate impact. The players hope to be able to vote in union only hearings, and have their own committees to make decisions with the university. This could be a large step for student-athlete/NCAA relations.

Of course, the university is planning on appealing this decision. Any action that could possibly take power or money out of their hands, they will fight.

Northwestern issued some bullshit general statement-“While we respect the NLRB process and the regional director’s opinion, we disagree with it. Northwestern believes strongly that our student-athletes are not employees, but students. Unionization and collective bargaining are not the appropriate methods to address the concerns raised by student-athletes.”

Northwestern is a great school, so hopefully these athletes have a plan. I’m just happy they saw an opportunity to bring new culture to college athletics, and decided to do something about it. Keep fighting the good fight NU.