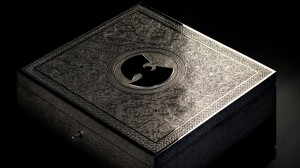 I guess I’m on a Hip-Hop/Art kick, but the merging of the genres keep coming up in the media. According to an exclusive Forbes article, the illustrious group Wu-Tang Clan is going to release only ONE COPY of their new album Once Upon A Time In Shaolin. It is going to be sheathed in a silver/nickel jewel case crafted by British-Moroccan artist Yahya, silversmith to royalty.

“Like the work of a master Impressionist, it will truly be one-of-a-kind—in lieu of a traditional major label or independent launch, the iconic hip-hop collective will make and sell just one copy of the album. And similar to a Monet or a Degas, the price tag will be a multimillion-dollar figure.”

In a wave of new album releases—Beyconé releasing her album without advertising and my last Article about Jay-Z whose albums were pre-purchased by Samsung for $5 million dollars—Wu-Tang Clan is doing something that pushes the music industry.  Like traditional museum critique, they are exposing the flaws with a completely non-commercial music industry.  Why do we expect to get all our music for free when these artists are crafting such intensive creative products?

What wealthy patron will purchase this album? And will they put it on the Internet for everyone else? (I hope so.)

According to the article the rap group plans to further the “album as art” metaphor by having private shows in galleries with headphones for the price of $30-$50, like a traveling exhibition. These shows will have strict security so that no recording devices will enter the arena, completely destroying the agenda of the project.

For more on this check out the full article: http://www.forbes.com/sites/zackomalleygreenburg/2014/03/26/why-wu-tang-will-release-just-one-copy-of-its-secret-album/