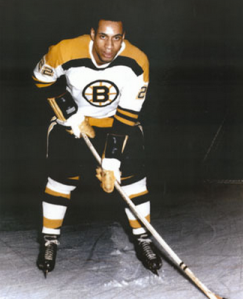 Willie was the first African American to play in the National Hockey League. He was a Boston Bruin, and his first game was against the rival Canadians. This was in 1958, in the beginning of the Civil Rights Era. He knew the risks that would be presented as he travelled around the country, but Willie wanted to integrate the game, and send a message to the culture of America.

After Willie, there was not another African American player for 17 years. Even though he broke the barrier, the sport was not popular among the youth of America. After he retired, Willie travelled to underprivileged black communities to fund and create youth hockey leagues.

Willie O’Ree changed the hockey culture of America, and even though it is still not as integrated as it should be, the impact of Willie will never be forgotten.