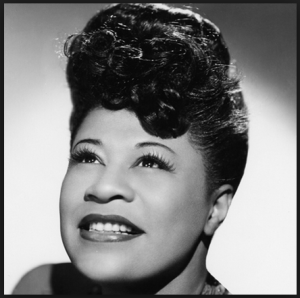 Ella defines overcoming adversity. As a child, both her parents had died, and her stepfather abused her. She ran away when she was in 3rd grade, and became an orphan in Harlem. At the age of 17, she performed at the Apollo Theater, and blew the crowd away. Since that performance, she has captivated the world with her voice and original culture.

Her originality is what set her apart. She was one of the first artists to incorporate improvisational scat singing into her music. Her voice spanned 3 octaves (I don’t know what that means, but sounds impressive) and is known as the “Queen of Jazz.”

She also provided hope for many African American women out there who wanted to pursue a career in music. She was the first black women to really make it big in the industry, and in 1967, she was the first black person to win a grammy award. Ella was also awarded with a Presidential Medal of Freedom for her outspoken leadership during the Civil Rights Era.

Ella changed the jazz culture forever, while also providing a role model for orphans, African-Americans, and women all over the world.