The 1988 Dunk Contest featured the two of the top five dunkers of all time; Dominique “The Human Highlight Reel” Wilkins and Michael Jordan. They were going back and forth at each other, 50 after 50 (5 judges, 1-10 scale). A true heavyweight championship bout. The greatest show in the dunk contest ever.

This was back before the pussification of the NBA. Back when players were competitive. Lebron, who most likely is the best dunker in the world, refuses to enter the dunk contest. He is either scared of the competition, scared of getting hurt, or scared of not being as good as MJ.

It was the last round, last dunk. Michael needed 49 points to win. This is when MJ pulled out the most iconic dunk in basketball history. In front of the hometown crowd, MJ flew:

Quiz: Is this photoshopped or is it the wall behind me while I wrote this blog? 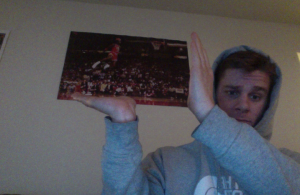