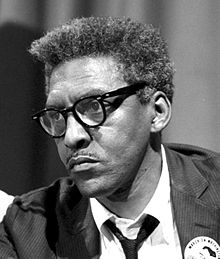 Bayard Rustin was the MLK that no one noticed. He believed in nonviolent displays of protest. He was a leader of social movements for civil rights and gay rights. He was very important during the Civil Rights era because he brought MLK’s message to the south. He organized freedom rides and other nonviolent protests throughout the south.

After the Civil Rights era, he continued his passion for making America better by protesting for the rights of gay people. Bayard himself was gay, and was not afraid to tell people. He led the way for many other gay people, black or white. In 2013, Obama awarded him with an honorary presidential medal of freedom, and in 2014, TMC awarded him with the Cultural Figure of the Day. Bayard Rustin was a leader who we can all learn from.