Because of the overwhelming response to my starting 5, even though it was mostly negative, I decided to add a bench to this all-time great squad.

He went to Harvard. He is conscientious about saving money, so he sleeps on teammates couches.

Can only shoot 3’s, and does the whitest gun in holster celebration ever seen. 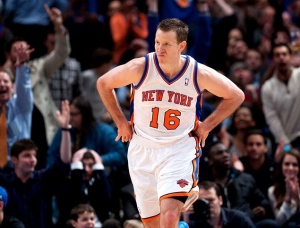 Outside of basketball, Hayward is an avid video game player, and has been involved with the IGN Pro League. Some of the games he plays include StarCraft II and League of Legends.

In 2010, he was chosen as the 19th-smartest athlete in sports by Sporting News. Bonner never received less than an “A” as final grade in any class throughout his academic career, until he received a “C” on a chemistry exam in college, which led to a final grade of a “B” In 2008, Bonner signed with New Balance to produce his own basketball shoe.

He was misdiagnosed with ADHD as a child, and is now a spokesman for the possible negative effects of a misdiagnosis of this disorder. He grew up on a farm and was known for tearing shingles off of barn roofs.