Let’s talk about the most cultured culture of all, Art. I am a self declared Linda, burgeoning art historian, and also some burgah who volunteered to write for this blog. Mushes and Mooks, keep your culture in your pants because I’m here to discuss the female nude.

Traditionally, to become a genius artist one had to master the female nude which is pretty problematic because up until the 19th century women were confined to only being the model; and who knows the female form better than herself? Did you know that less than 4% of the artists in the Modern Art Collection at the MET are female, but 76% of the nudes are women. However, just because they couldn’t paint doesn’t mean they weren’t bad-ass. Let’s look at The Top Five Females Who Took Back The Nude.

This young Spanish court painter was wry little mastermind. Besides creating controversial royal portraits that mocked Spanish power, radical civil war etchings, and dark mythical paintings, he depicted this lovely lady. La Maja Desnuda is a two-part work that was commissioned for Manuel de Goody who was part of the royal Spanish court and alleged male misteress of the queen. Goody also had a collection of naughty paintings. The first painting in the pair is of the woman fully dressed in upper class attire reclining on the same chaise. However, the nude Maja does not shy away from  the observer, she looks unabashedly back at us. Although her name is not known, Goya’s Maja is a powerful female who is not ashamed of nothing.

Olympia is a flawless Parisian prostitute. Her servant offers her flowers from some inadequate suitor but she is just not interested.  Like her Maja friend, Olympia meets your male gaze with power and pride. Even the French were shocked by this work when it appeared at a Salon in 1865. 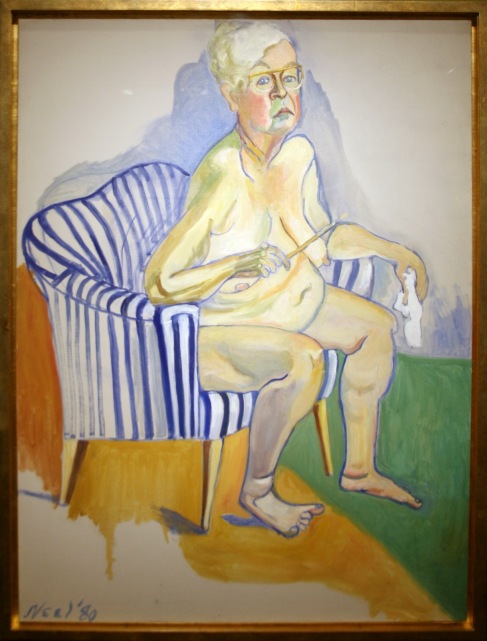 Eventually, women became revered painters. Often they used themselves as models. Alice Neel is no exception and with her first self-portrait at the age of 84, she is unafraid to bare her aging body. An American born accomplished portraitist, Neel shows her individuality in this painting. With her paintbrush in hand, Neel is a powerful female even in her old age. 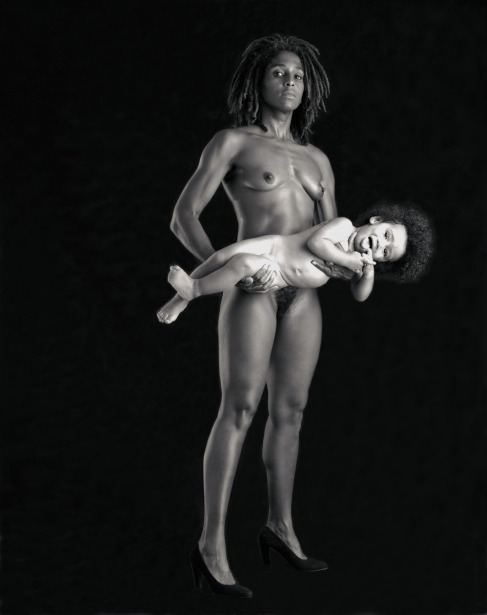 Jamaican Born Renée Cox is an example of a contemporary artist who confronts images of race and gender in her photography. Standing proud in black pumps, Cox holds her son like a gun. Check out her other guns, girl got some Michelle Obama Arms.

Lastly we have Cindy Sherman. Sherman was made famous by her Untitled Film Stills series in 1977-1980 where she photographed herself as nameless damsels in distress. Then in 1992 the King Hugh Hefner asked Sherman to create a centerfold for Playboy magazine. This assemblage is what she presented—seems just as real as other models featured in the publication. Sherman took back the nude by denying a fleshy female body.

Nudes exist throughout the history of art. Let’s grant some of these females autonomy over their naked figure. Enjoy the culture.