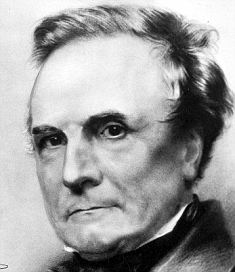 Charles Babbage(December 26, 1791-October 18, 1891) was an English polymath. He was a mathematician, philosopher, inventor and mechanical engineer, who is best remembered now for originating the concept of a programmable computer.
Considered a “father of the computer”, Babbage is credited with inventing the first mechanical computer that eventually led to more complex designs. Although Babbage’s machines were rather ponderous, their basic architecture was similar to a modern computer. His economic theory, now called the “Babbage principle” has influenced many philosophers such as Karl Marx and John Stuart Mill. Charles, computers might not be what they are today without you.